The effect of CPU, link-time (LTO) and profile-guided (PGO) optimizations on the compiler itself

In other words, how much faster will a compiler be after it's been built with various optimizations?

Given the recent Clang12 release, I've decided to update my local build of Clang11 that I've been using for building LibreOffice. I switched to using my own Clang build instead of openSUSE packages somewhen in the past because it was faster. I've meanwhile forgot how much faster :), and openSUSE packages now build with LTO, so I've built Clang12 in several different ways to test the effect and this is it: 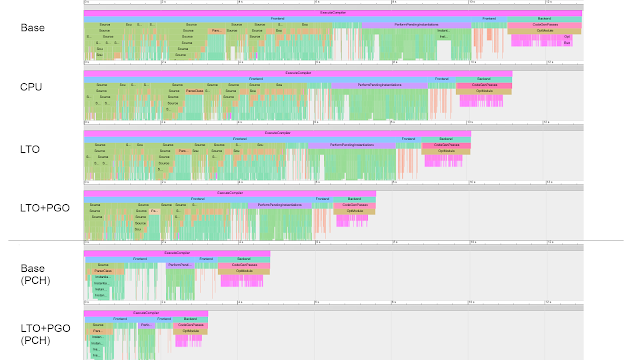 The file compiled is LO Calc's document.cxx, a fairly large source file, in a debug LO build. The compilation of the file is always the same, the only thing that differs is the compiler used and whether LO's PCH support is enabled. And the items are:

Mind you, this is just for one randomly selected file. YMMV. For the build from the video from the last time, the original time of 4m39s with Clang11 LTO PCH goes down to 3m31s for Clang12 LTO+PGO PCH, which is 76%, which is consistent with the LTO->LTO+PGO change above.